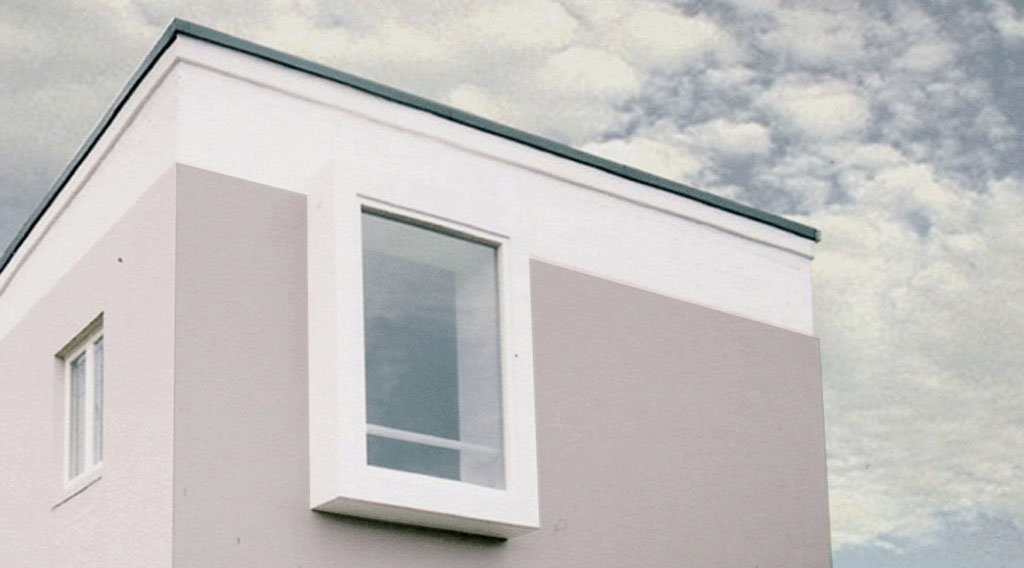 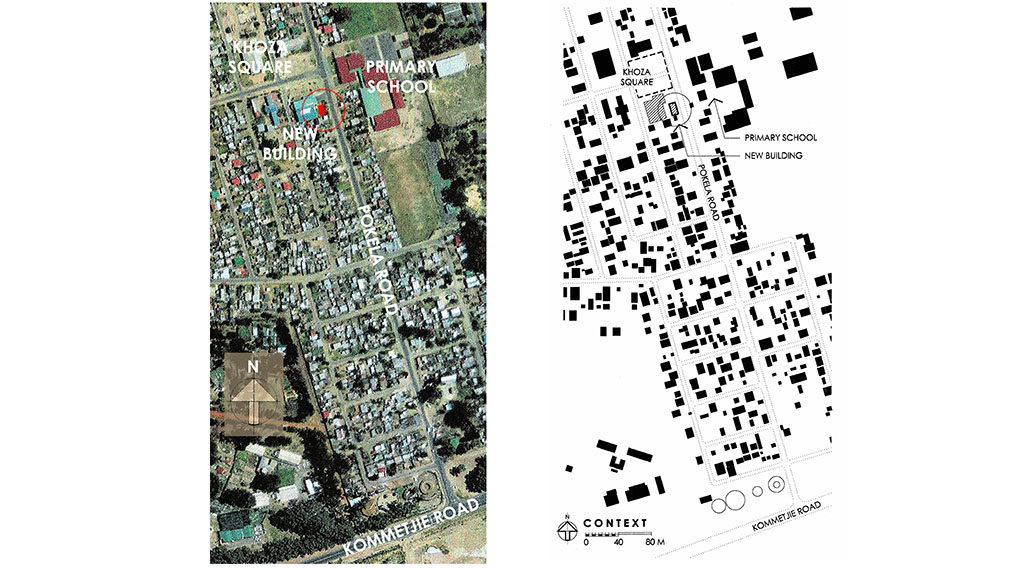 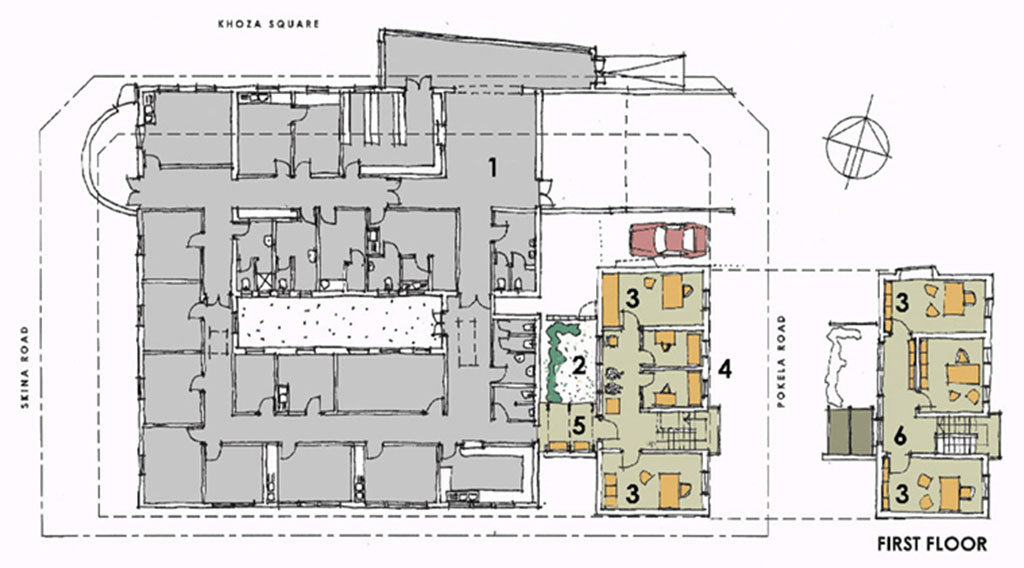 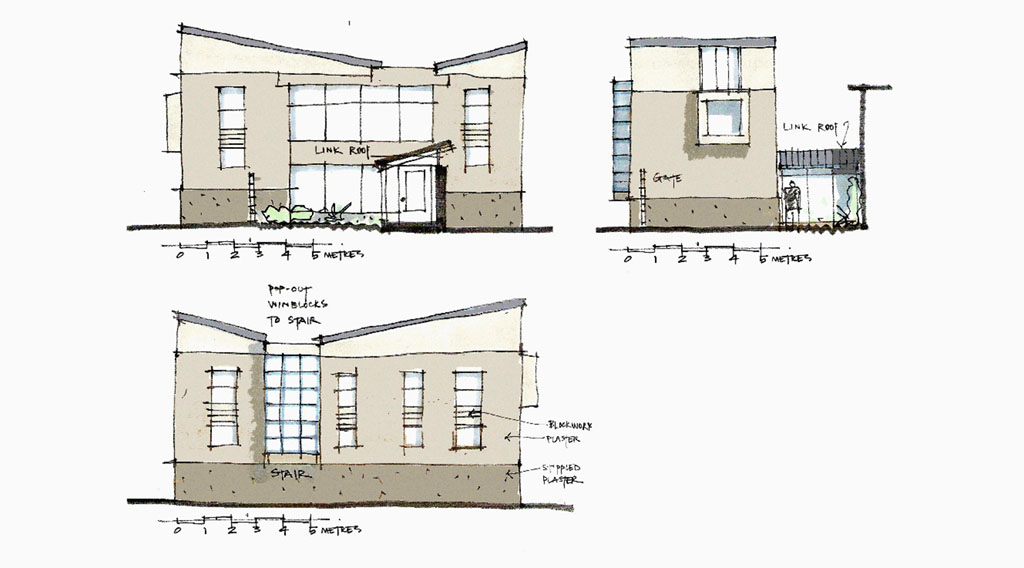 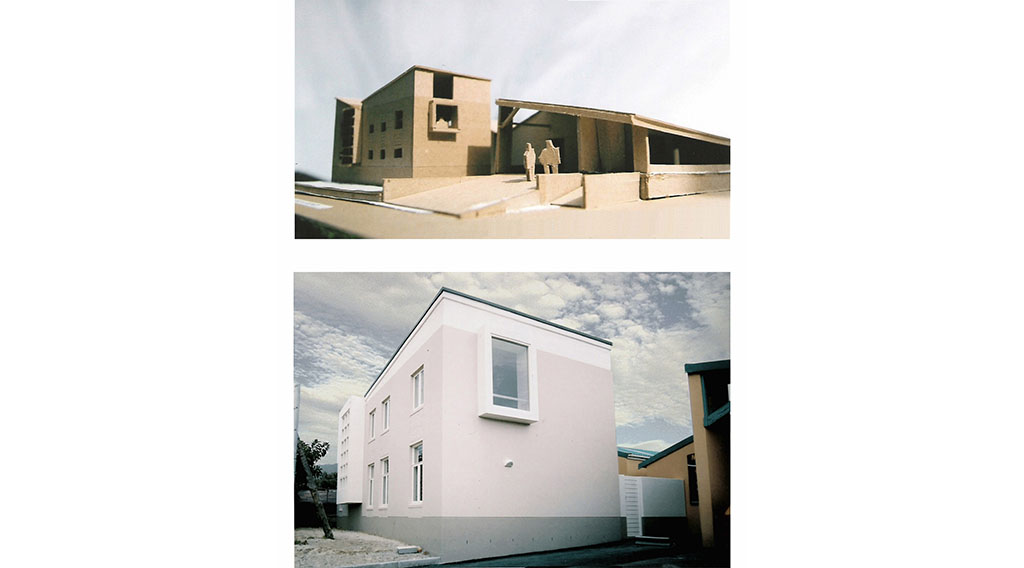 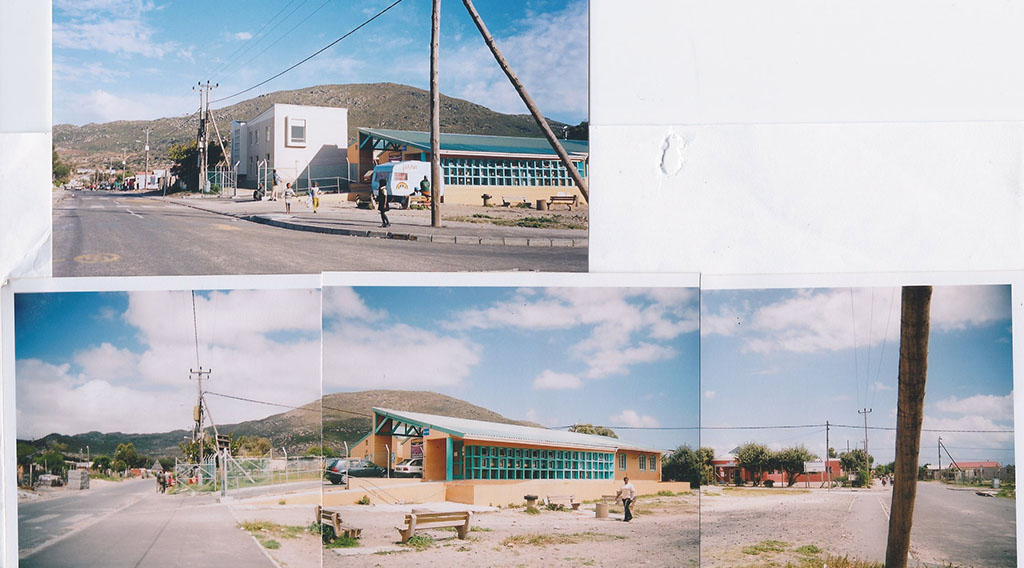 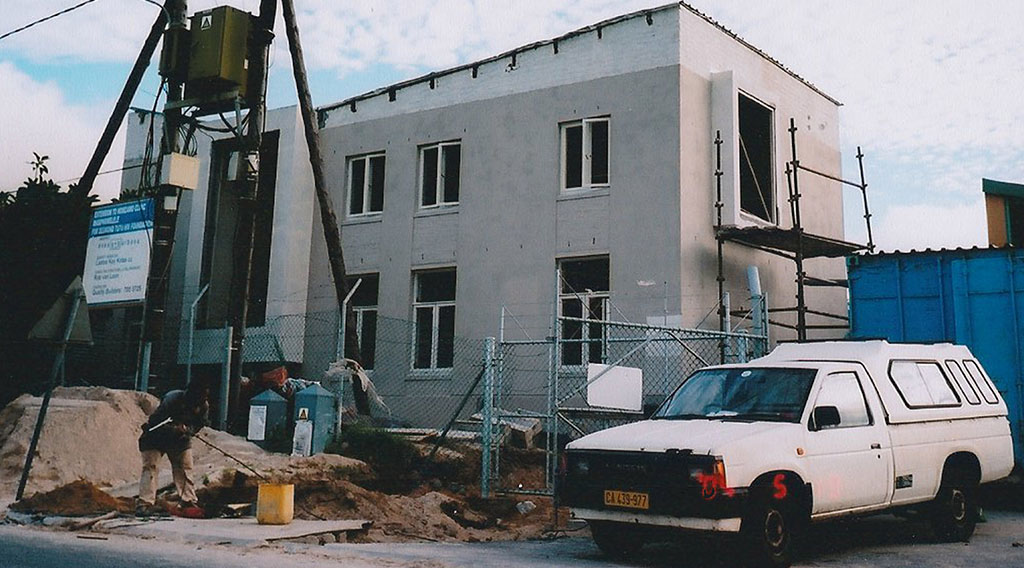 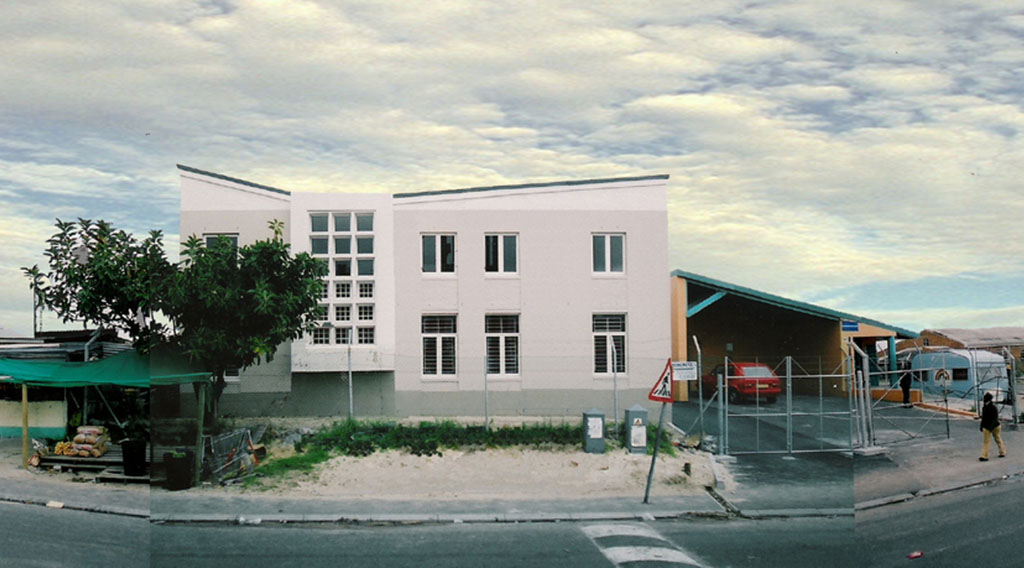 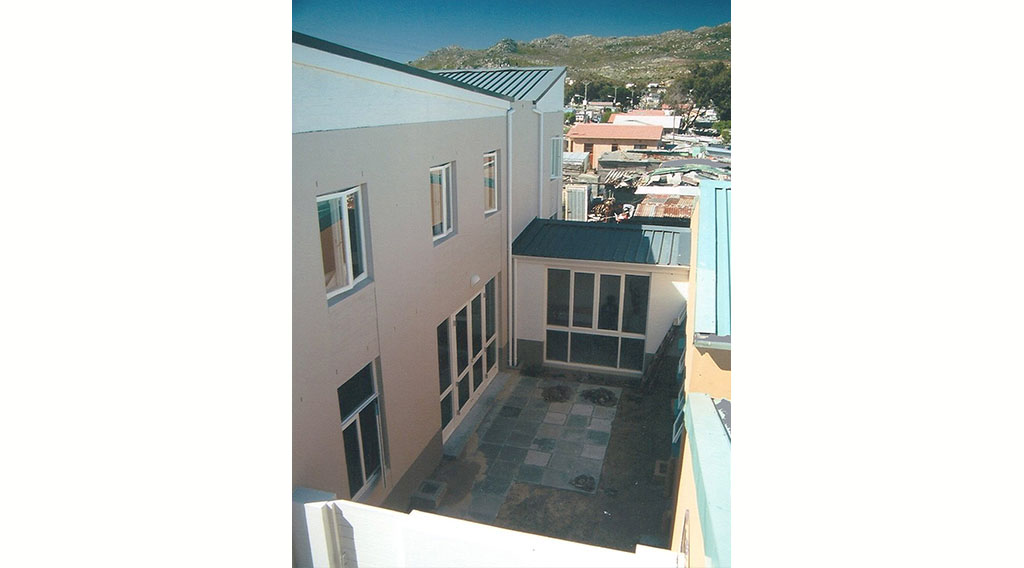 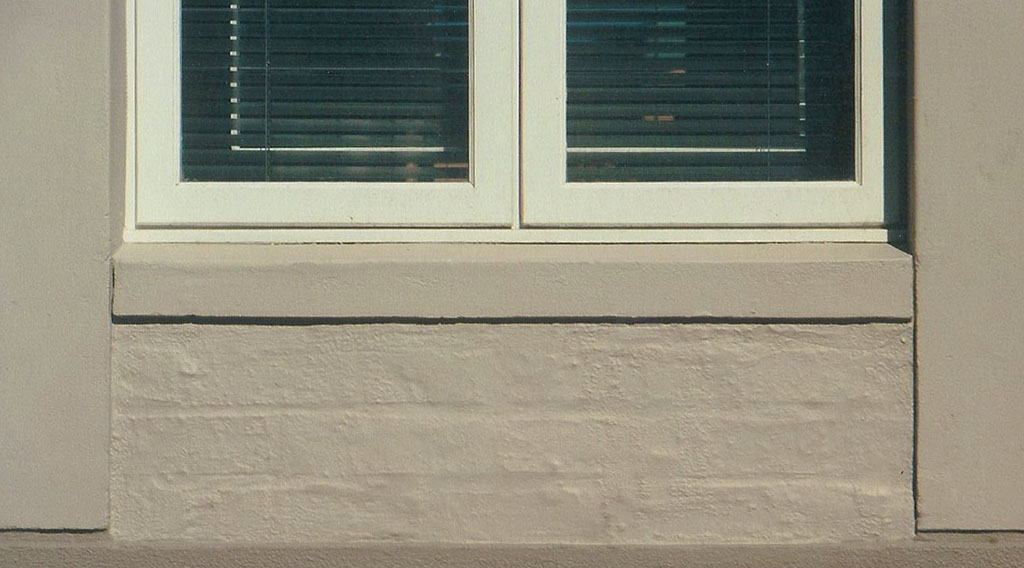 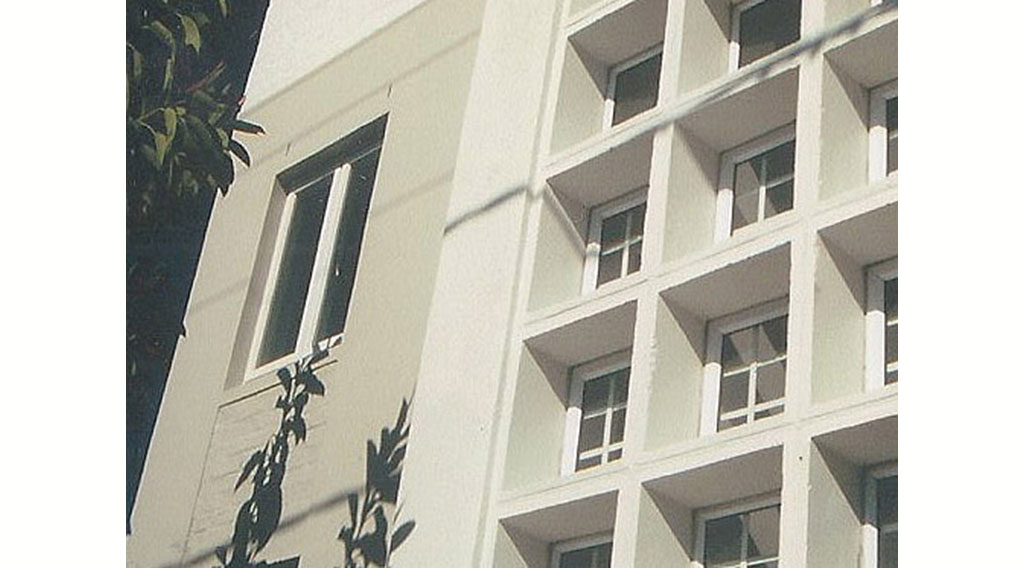 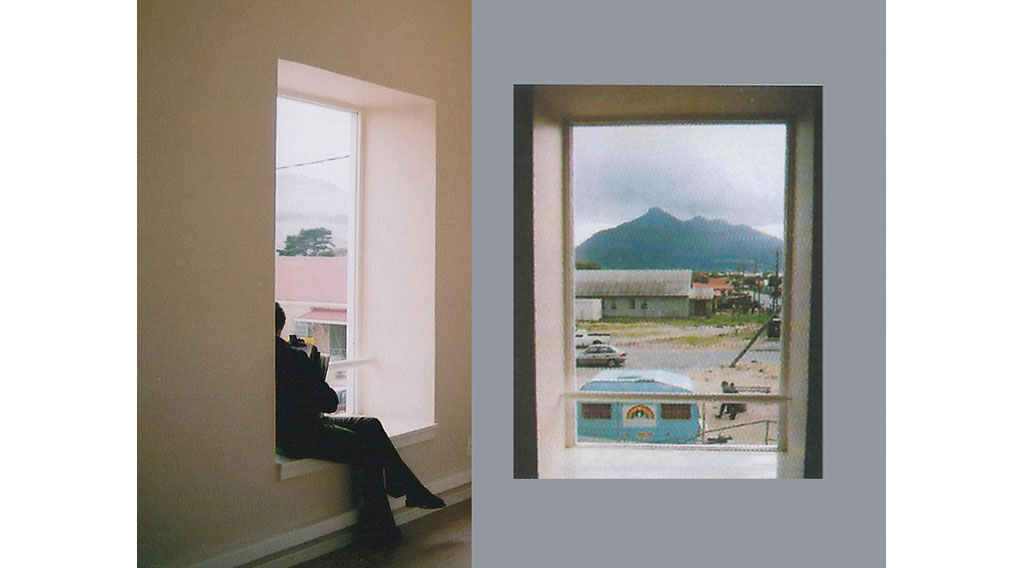 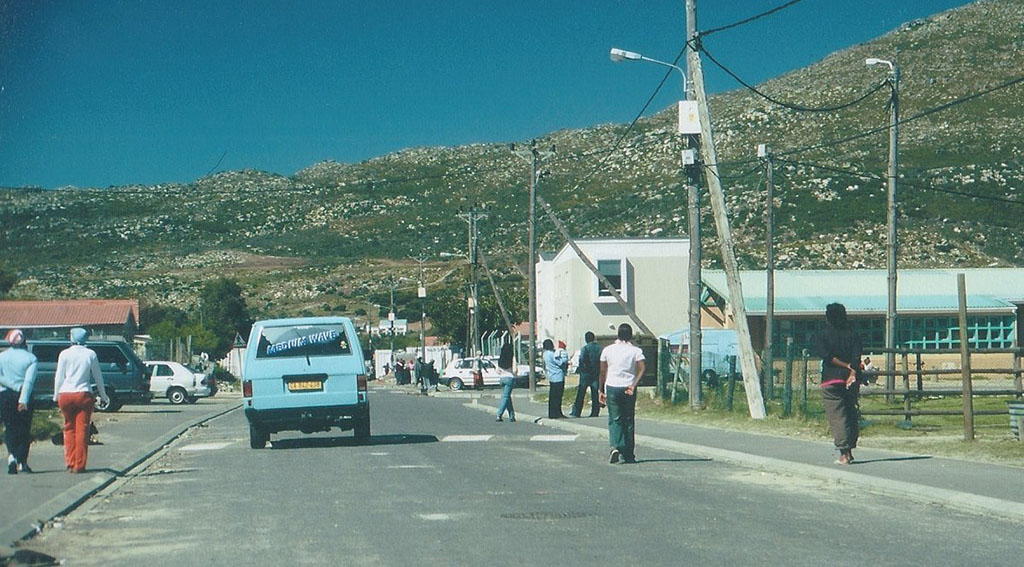 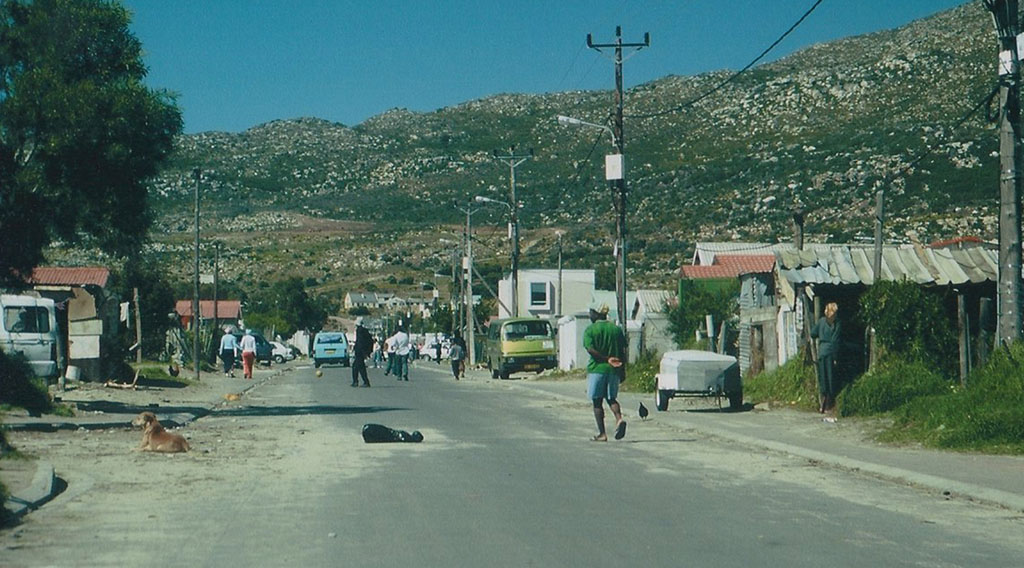 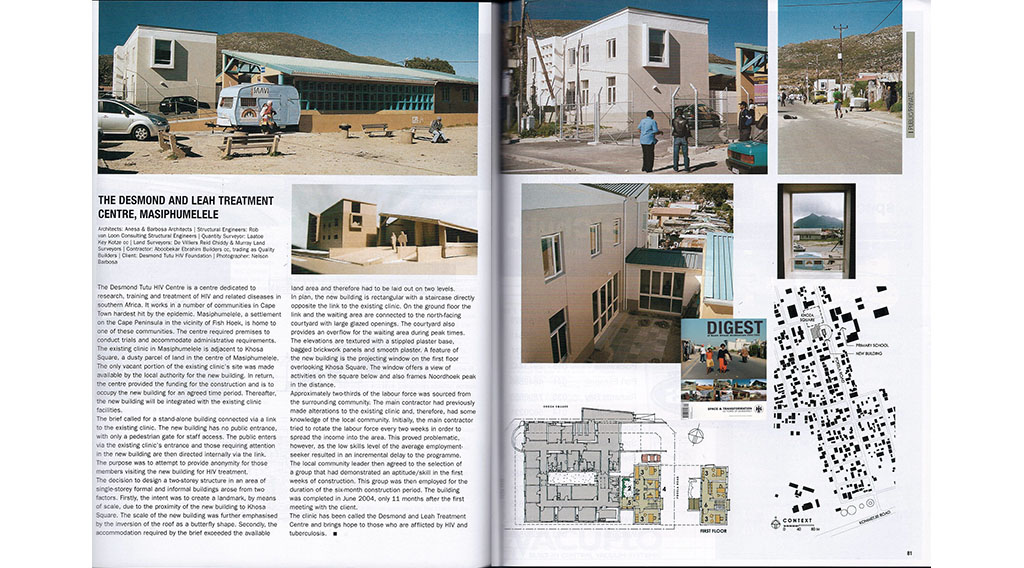 The Desmond Tutu HIV Centre is a centre dedicated to research, training and treatment of HIV and related diseases in Southern Africa. It works in a number of communities in Cape Town hardest hit by the epidemic. Masiphumelele, a settlement on the Cape Peninsula in the vicinity of Fishoek, is home to one of these communities. The Centre required premises to conduct trials and accommodate administrative requirements. The existing clinic in Masiphumelele is adjacent to Khosa Square, a dusty parcel of land in the centre of Masiphumelele. The only vacant portion of the existing clinic’s site was made available by the Local Authority for the new building. In return, the Centre provided the funding for the construction and is to occupy the new building for an agreed time period. Thereafter, the new building will be integrated with the existing clinic facilities.

The decision to design a two-storey structure in an area of single-storey formal and informal buildings arose from two factors. Firstly, the intent was to create a landmark, by means of scale, due to the proximity of the new building to Khosa Square. The scale of the new building was further emphasised by the inversion of the roof as a butterfly shape. Secondly, the accommodation required by the brief exceeded the available land area and therefore had to be laid out on two levels.

In plan, the new building is rectangular with a staircase directly opposite the Link to the existing clinic. On the ground floor the Link and the Waiting Area are connected to the north-facing Courtyard with large glazed openings. The Courtyard also provides an overflow for the Waiting Area during peak times.

The elevations are textured with a stippled plaster base, bagged brickwork panels and smooth plaster. A feature of the new building is the projecting window on the first floor overlooking Khosa Square. The window offers a view of activities on the square below and also frames Noordhoek peak in the distance.

Approximately two-thirds of the labour force was sourced from the surrounding community. The main contractor had previously made alterations to the existing clinic and, therefore, had some knowledge of the local community. Initially, the main contractor tried to rotate the labour force every two weeks in order to spread the income into the area. This proved problematic, however, as the low skills level of the average employment-seeker resulted in an incremental delay to the programme. The local community leader then agreed to the selection of a group that had demonstrated an aptitude/skill in the first weeks of construction. This group was then employed for the duration of the six-month construction period. The building was completed in June 2004, only eleven months after the first meeting with the client.

The Clinic has been called the Desmond and Leah Treatment Centre and brings hope to those who are afflicted by HIV and tuberculosis.